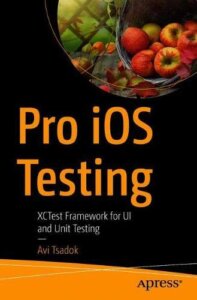 Discover what tools there are for unit testing in iOS, and how to work in a test-driven environment. This book reveals how testing is a crucial capability in any iOS developer’s toolset, and a minimum requirement in iOS interviews.

A few years ago, tests on mobile platforms were not very popular. It wasn’t a technical constraint, more a cultural one. But these days it’s a crucial skill set, especially when projects become big and hard to maintain. This book shows you how to set up a testing target in XCode unit tests. You’ll learn how to write unit tests properly and incorporate concepts like spies and mocks and code coverage. You’ll also learn the philosophy behind the architecture of UI tests, and how to mock network and DB layers in testing. Write unbreakable UI tests performance tests, as well. And learn the difference between integration tests and snapshot testing.

This book will show you how to maintain code that’s not only bug-free but will also remain high quality over time and maintainable while you make changes and refactors during an app’s life. Testing in all its aspects is the best way of maintaining iOS projects to run fast and reliably long after you’ve released them.

Many iOS developers working today lack an understanding of the advantages of testing, and might be unfamiliar with tools that make the job easier, such as XCTest framework. With Pro iOS Testing you’ll see how to develop and test apps that work and stay working for a long time.

Professional iOS developers with extensive experience in the basics of building apps.