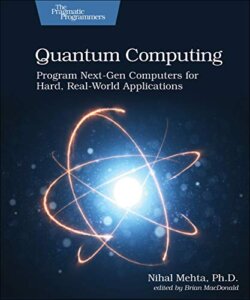 You’ve heard that quantum computing is going to change the world. Now you can check it out for yourself. Learn how quantum computing works, and write programs that run on the IBM Q quantum computer, one of the world’s first functioning quantum computers. Learn a simple way to apply quantum mechanics to computer programming. Create algorithms to solve intractable problems for classical computers, and discover how to explore the entire problem space at once to determine the optimal solution. Get your hands on the future of computing today.

Quantum computing overhauls computer science. Problems such as designing life-saving drugs and super-large logistics problems that have been difficult or impossible for classical computers to handle can now be solved in moments. Quantum computing makes it possible to explore all possible solutions simultaneously and determine those that work, instead of iterating through each possibility sequentially. Work with quantum computers directly, instead of talking about them theoretically.

Discover a new visual way of looking at quantum bits that makes quantum computing intuitive for computer programmers. Master the special properties that make them different, and more powerful, than classical bits. Control quantum bits with gates and create circuits to model complex problems. Write programs that run on real quantum machines to solve problems that classical computers struggle with. Dive into quantum optimization and cryptography.

Get a head start on the technology that will drive computer science into the future.

Access to the IBM quantum computer, via any internet connection

Marketing in the A...