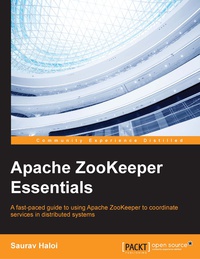 Starting with how to install, configure, and begin with ZooKeeper, we’ll examine the intricacies of ZooKeeper’s architecture and internals. Next, you’ll learn ZooKeeper’s programming model and write code to solve common distributed coordination tasks. We’ll also walk you through administering ZooKeeper in a production environment, before finally covering practical examples of real-world projects and services using ZooKeeper to solve complex day-to-day problems.

***** Who This Book Is For *****
Whether you are a novice to ZooKeeper or already have some experience, you will be able to master the concepts of ZooKeeper and its usage with ease.

This book assumes you to have some prior knowledge of distributed systems and high-level programming knowledge of C, Java, or Python, but no experience with Apache ZooKeeper is required.