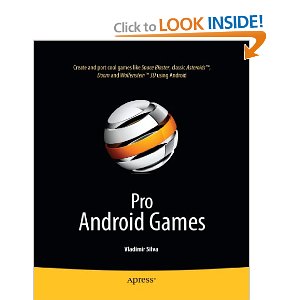 Do you remember landmark games like Wolfenstein 3D, Doom, and Asteroids? Well, here’s an exciting opportunity to build and/or port these games to one of the hottest mobile and netbooks platforms today: Google’s Android.

Pro Android Games teaches you how to build cool games like Space Blaster and the classic Asteroids from scratch on the latest Android platform. This book also shows you how to port other classic freeware/shareware games like Doom and Wolfenstein 3D from C using the Java Native Interface (JNI) for Android.

This book is all about a unique perspective in Android game development: a well-balanced, powerful combination of pure Java and hybrid game development, mixing Java and C. By combining the elegant object-oriented features of Java and the raw power of C, there is no limit to the types of games that you can build for the platform. With actionable real-world source code in hand, this book allows you to dive right into games development on Android. You’ll definitely have fun, and perhaps you’ll even make some money. Enjoy!

How to write/port advanced 3D games for any Android device.

How to setup a Linux system for hybrid game compilation.

How to combine Java and C code in an elegant manner by building a simple Java application on top of a native library.

How to mix OpenGL API calls in Java and C for high performance 3D graphics using the 3D cubes sample by Google.

How to bring two of the greatest PC 3D shooters to the Android platform: Wolfenstein 3D and Doom using Java and C.

This book is for Google Android developers interested in game application development in Java or porting existing C-based games via JNI into Android and developing/deploying from there. It is targeted to developers who already know such basics of Android development as activity, view, and layout. Additionally, it assumes that you are a seasoned game developer in Java and C, and have a basic knowledge of Linux and Shell Scripting.

Vladimir Silva holds a master’s degree in computer science from Middle Tennessee State University. He worked for four years for IBM as a research engineer where he acquired extensive experience in distributed and grid computing research. Vladimir is a highly technical, focus–based individual and team player. He belongs to two National Honor Societies and has published many computer science articles for IBM and is author of Grid Computing for Developers (Charles River Media, 2005) and RCP Practical Projects (Apress 2008).