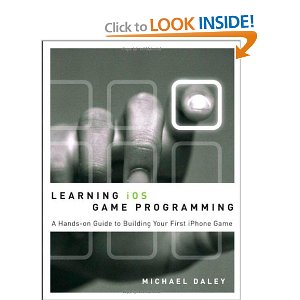 Since the launch of the App Store, games have been the hottest category of apps for the iPhone, iPod touch, and iPad. That means your best chance of tapping into the iPhone/iPad “Gold Rush” is to put out a killer game that everyone wants to play (and talk about). While many people think games are hard to build, they can actually be quite easy, and Learning iOS Game Programming is your perfect beginner’s guide. Michael Daley walks you through every step as you build a killer 2D game for the iPhone.

In Learning iOS Game Programming, you’ll learn how to build a 2D tile map game, Sir Lamorak’s Quest: The Spell of Release (which is free in the App Store). You can download and play the game you’re going to build while you learn about the code and everything behind the scenes. Daley identifies the key characteristics of a successful iPhone game and introduces the technologies, terminology, and tools you will use. Then, he carefully guides you through the whole development process: from planning storylines and game play all the way through testing and tuning.

Download the free version of Sir Lamorak’s Quest from the App Store today, while you learn how to build the game in this book.

Delivering great sound via OpenAL and the iPhone’s media player

Building game objects and entities and making them work properly

Detecting collisions and ensuring the right response to them

Learning iOS Game Programming focuses on the features, concepts, and techniques you’ll use most often—and helps you master them in a real-world context. This book is 100% useful and 100% practical; there’s never been an iPhone game development book like it!

“An excellent introduction into the world of game development explaining every aspect of game design and implementation for the iPad, iPhone, and iPod touch devices. A great way for anyone interested in writing games to get started.”

“A great developer and a great game.That’s everything you can find in this book to learn how to write an awesome game for iPhone.Maybe you’re the next AppStore hit!”

“With Learning iOS Game Programming, you’ll be writing your own games in no time. The code included is well explained and will save you hours of looking up obscure stuff in the documentation and online forums.”

“I always thought that to teach others one has to be an expert and a person with an established reputation in the field. Michael Daley proved me wrong. He is teaching others while studying himself. Michael’s passion in teaching and studying, ease of solutions to problems, and a complete game as a resulting project makes this book one of the best I have ever read.”

“If you’re interested in 2D game programming with the iOS using OpenGL and OpenAL directly, this book walks you through creating a complete and fun game without getting bogged down in technical details.”

“Michael Daley brings clarity to the haze of iPhone application development. Concrete examples, thorough explanation, and timesaving tips make this book a must have for the up and coming iPhone game developer.”

“This is the A-Z guide to iOS game development; Michael’s book takes you from the basics and terminology to using the techniques in practice on a fully working game. Before you know it, you will find yourself writing your own game, fueled by a firm grasp of the principles and techniques learned within. I could not ask for a better reference in developing our own games.”

By day, Michael Daley works for the largest enterprise software company in the world supporting large corporate customers in communications. By night, Michael has taken on the task of learning how to build games for the iPhone. Michael started writing adventure games in BASIC on a Sinclair Spectrum 48k and progressed onto the Commodore 64 and the Amiga A500. Never having lost a passion for game programming, Michael got inspired to learn Objective-C when the iPhone came out, and he set out to learn how to build games for the iPhone.

Having written many games for his children over the years, the launch of the iPhone inspired him to create games for the platform that would be available to more than his children. Michael has a passion for learning new technologies and how to apply them. He’s a true Apple fan, spending far too much time and money on the latest Apple equipment.