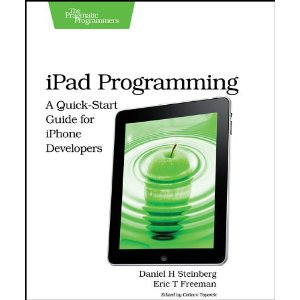 Hold an iPad in your hands and you’ll know what the fuss is all about. Select an app and the device disappears as you find yourself immersed in the experience–the iPad defines a new category for devices. iPad Programming shows you how to build apps for the iPad that people will love to use.

This quick-start guide will have you writing iPad apps right away using a combination of the familiar iphone APIs along with the new APIs and additional templates designed specifically for creating iPad applications.

The iPad has a display that’s more than seven times as big as the iPhone. The metaphors are different; the application design is different. Users will be able to interact with your iPad app in new ways. In this book you’ll learn to take advantage or the additional real estate and functionality.

Every time you turn around it seems as if there’s another ten thousand apps added to the App Store for the iPhone. If you’re building iPad-specific apps, it’s a brand new day with plenty of opportunity. In this book we don’t just teach you to write apps that run on an iPad, we teach you to create apps that delight users because they wouldn’t make sense running on any other device.

Eric T Freeman is a media company executive and co-author of two bestselling books: “Head First Design Patterns” and “Head First HTML & CSS.” A computer scientist with a passion for media and software architectures, Eric has been an Apple programmer since the days of the Newton. Eric holds a Ph.D. from Yale University.