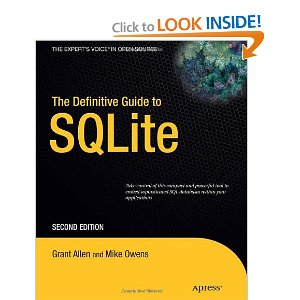 内容简介
The Definitive Guide to SQLite, Second Edition is your one-stop resource for integrating one of the most advanced and innovative open source database management systems into your development projects. SQLite is freely-available and comes with an amazingly small foot print of less than 300 kilobytes for a full-blown implementation. It’s perfect for mobile and other embedded implementations, including the iphone and android platforms. It’s also the default database distributed with PHP.

In The Definitive Guide to SQLite, Second Edition, Authors Grant Allen and Mike Owen provide complete coverage of SQLite’s powerful array of features. You’ll learn to use SQLite with PHP, C++, Java, and more. You’ll see how SQLite’s file-based approach can easily handle databases as large as two terabytes. You’ll also enjoy complete coverage of the API, and learn to embed SQLite within mobile applications on the iPhone, and on Android platforms.

Demonstrates SQLite’s use in iPhone and Android development.
Helps you integrate with popular languages such as PHP, C++, Java, and more.
Serves as an excellent tutorial, and ongoing reference.

你将学到
Deploy SQLite as the database engine for iPhone and Android applications.
Interact with SQLite from Java, C++, PHP, and other key languages.
Create robust database designs, taking advantage of new support for primary and foreign key constraints.
Embed zero-maintenance databases directly within applications that you write.
Improve performance through a good understanding of SQLite internals.
Exploit new features such as the shared cache, the SQL Logic Test Suite, the Unlock and Notify APIs, and query plan improvements.
Who this book is for
The Definitive Guide to SQLite is for developers needing a zero-maintenance database solution to deploy as an embedded component within their product. The book is especially useful for mobile developers delivering applications to run on the iPhone, or on the Android platform. PHP developers will also find the book useful if they are using the default database delivered as part of a PHP installation.

关于作者
Grant Allen has worked in the IT field for nearly 20 years, specializing in relational database management systems from a variety of vendors. For the past decade, he has worked in the Asia-Pacific region and Europe as a principal database consultant and enterprise architect for several organizations, and he now works in the database field for Google. Grant is a certified DB2 database administrator for DB2 under Linux, Unix, and Windows, and is a past presenter at the International DB2 Users Group conferences.

Mike Owens is the IT director for a major real estate firm in Fort Worth, Texas, where he’s charged with the development and management of the company’s core systems. His prior experience includes time spent at Oak Ridge National Laboratory as a process design engineer, and at Nova Information Systems as a C++ programmer. He is the original creator of Pysqlite, the Python extension for SQLite. Mike earned his bachelor’s degree in chemical engineering from the University of Tennessee in Knoxville.
[下载地址1]