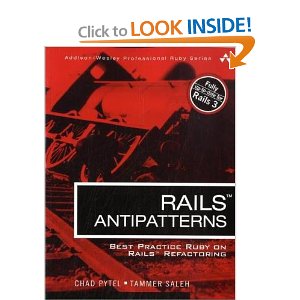 The Complete Guide to Avoiding and Fixing Common Rails 3 Code and Design Problems.

As developers worldwide have adopted the powerful Ruby on Rails web framework, many have fallen victim to common mistakes that reduce code quality, performance, reliability, stability, scalability, and maintainability. Rails? AntiPatterns identifies these widespread Rails code and design problems, explains why they’re bad and why they happen—and shows exactly what to do instead.

Domain modeling, including schema and database issues such as normalization and serialization

Third-party code, including plug-ins and gems

Database issues, including migrations and validations

System design for “graceful degradation” in the real world

Chad Pytel is the founder and CEO of thoughtbot, a software development firm specializing in Ruby on Rails, and creators of Paperclip, Shoulda, FactoryGirl, and Hoptoad, among other projects. thoughtbot embraces both agile development methodologies and a “getting real” project philosophy. Chad coauthored Pro Active Record: Databases with Ruby and Rails (Apress, 2007) and has presented at various conferences around the world. To follow along with Chad and the rest of the thoughtbot team’s ideas on development, design, technology, and business, visit their blog at http://robots.thoughtbot.com.

Tammer Saleh is the director of engineering at Engine Yard. He wrote the Shoulda testing framework, was the primary developer and project manager for thoughtbot’s fantastic Hoptoad service, and is an experienced Ruby on Rails trainer and speaker. In previous lives, he’s done AI development for the NCSA and the University of Illinois, as well as systems administration for both Citysearch.com and Caltech’s Earthquake Detection Network. You can find him online at http://tammersaleh.com.