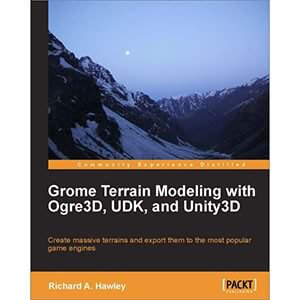 Grome is an environmental modeling package that makes the creation and editing of large terrain areas an easy task. Grome has the ability to take huge datasets suitable for MMOs and simulations and this marks it as a welcome tool in a developer’s toolbox.

“Grome Terrain Modeling with Ogre3D, UDK, and Unity3D” shows you how to get to grips with this powerful terrain construction tool. This book walks you through how to create, edit, and export terrains to Unity3D, UDK, and Ogre3D.

“Grome Terrain Modeling with Ogre3D, UDK, and Unity3D” will guide you in creating new Grome terrain projects, splitting terrain into multiple zones, adding textures and ground features, and exporting your creations into a game engine.

You will learn how to export your landscapes to the most common 3D engines; Unity3D (PC and mobile), UDK, and Ogre3D. It’s a powerful addition to any production pipeline if your game needs terrain.

Approach
This book is a practical guide with examples and clear steps to explain terrain modeling with Grome.

Who this book is written for
If you’re a developer or artist looking for a guide to walk you through GROME 3.1, then this book is for you. This book will help you from the first step to exporting a terrain as a workable art asset in a game engine.