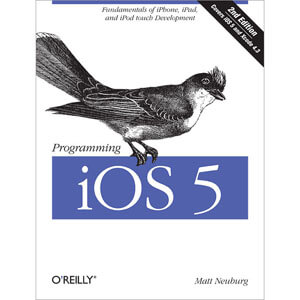 Get a solid grounding in the fundamentals of Cocoa Touch, and avoid problems during iphone and iPad app development. With this revised and expanded edition, you’ll dig into Cocoa and learn how to work effectively with Objective-C and Xcode. This book covers iOS 5 and Xcode 4.3 in a rigorous, orderly fashion—ideal whether you’re approaching iOS for the first time or need a reference to bolster existing skills.

The new memory management system—ARC—is thoroughly explained and all code examples have been revised to use it.
New Objective-C features, such as declaration of instance variables in the class’s implementation section, are described and incorporated into the revised example code.
Discussion of how an app launches, and all code examples, are revised for project templates from Xcode 4.2 and later.
Other new Xcode features, including the Simulator’s Debug menu, are covered, with screen shots based on Xcode 4.2 and later.
The discussion of Instruments is expanded, with screen shots—by popular request!
Storyboards are explained and discussed.
The explanation of view controllers is completely rewritten to include iOS 5 features, such as custom parent view controllers and UIPageViewController.
The Controls chapter now includes iOS 5 interface customizability and the appearance proxy.
New features of interface classes are discussed, including tiling and animated images, new table view features, new alert view styles.
Coverage of frameworks such as Core Motion and AV Foundation is greatly expanded. New iOS 5 classes and frameworks are also discussed, including Core Image and UIDocument (and iCloud support).
Important iOS 5 changes that can break existing code are explicitly called out in the text and listed in the index.