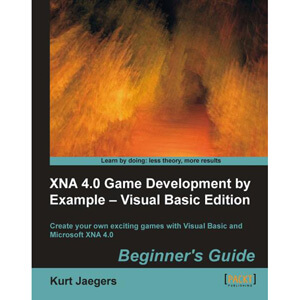 This book covers both the concepts and the implementations necessary to get you started on bringing your own creations to life with XNA. It presents four different games, including a puzzler, space shooter, multi-axis shoot ‘em up, and a jump-and-run platformer. Each game introduces new concepts and techniques to build a solid foundation for your own ideas and creativity.

This book details the creation of four games, all in different styles, from start to finish using Visual Basic and the Microsoft XNA framework. Beginning with the basics of drawing images to the screen, the book then incrementally introduces sprite animation, particles, sound effects, tile-based maps, and path finding. It then explores combining XNA with Windows Forms to build an interactive map editor, and builds a platform-style game using the editor-generated maps. Finally, the book covers the considerations necessary for deploying your games to the Xbox 360 platform.

By the end of the book, you will have a solid foundation of game development concepts and techniques as well as working sample games to extend and innovate upon. You will have the knowledge necessary to create games that you can complete without an army of fellow game developers at your back.

Install the Microsoft XNA Framework and its required tools
Build XNA Game projects and associated XNA Content projects
Create a puzzle-style game exploring the concepts of game states, recursion, and 2D animation
Add sound effects to your game with a “fire-and-forget” sound effects manager
Create a particle system to generate random explosions
Implement sound effects, collisions, and particle-based explosions by building a space shooter inside a chaotic asteroid field
Implement the A* path-finding algorithm to allow enemies to track down the player
Generate tile-based maps and path-finding enemy tanks amidst a storm of bullets in a multi-axis shooter
Combine XNA and Windows Forms to create a map editor for a multi-layered tile map engine
Run, jump, and squash enemies in a side-scrolling platform using the maps from your editor
Approach
This book is a step-by-step tutorial that includes complete source code for all of the games covered. It adopts an engaging style to teach all the game development concepts. Each block of code is explained, and game development concepts are diagrammed and covered in detail. Each game begins with a concept description and concludes with suggestions for expanding on the finished game.

A Web For Everyone