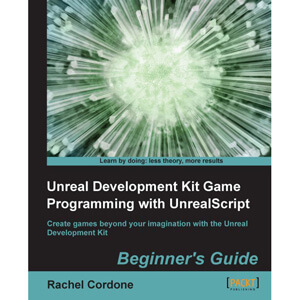 内容简介：
Unreal Development Kit is the free edition of Unreal Engine—the largest game engine in existence with hundreds of shipped commercial titles. The Unreal Engine is a very powerful tool for game development but with something so complex it’s hard to know where to start.

Unreal Development Kit Game Programming with UnrealScript takes you through the UnrealScript language for the Unreal Development Kit. It starts by walking through a project setup and setting up programs to write and browse code. It then takes you through using variables, functions, and custom classes to alter the game’s behavior and create our own functionality. The use and creation of Kismet is also covered. Later, using replication to create and test multiplayer games is discussed. The book closes with code optimization and error handling as well as a few of the less common but useful features of UnrealScript.

Set up a UDK project and learn how to compile and test your own code
Learn how to extend the UDK’s code to add your own functionality
Create your own game types, player camera, and HUD
Learn how UnrealScript interacts with Kismet and create your own Kismet actions and events
Use networking to create and test multiplayer games
Optimize your code to fix errors and performance problems
Use DLLBind to interact with code outside of the UDK
Approach
This is a step-by-step book that builds on your knowledge by adding to an example game over the course of each chapter. Each topic uses example code that can be compiled and tested to show how things work instead of just telling you. Complicated tasks are broken down into easy to follow steps with clear explanations of what each line of code is doing.

此书所为何人
This book is written for beginners to UnrealScript, whether this is your first experience with programming or you’re coming into it from another language and would like to learn how UnrealScript uses concepts you’re already familiar with. If you would like to make games with the Unreal Development Kit, this book is for you.