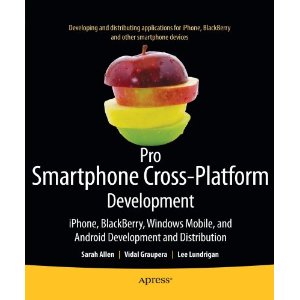 内容简介：
Learn the theory behind cross-platform development, and put the theory into practice with code using the invaluable information presented in this book. With in-depth coverage of development and distribution techniques for iphone, BlackBerry, Windows Mobile, and android, you’ll learn the native approach to working with each of these platforms. With detailed coverage of emerging frameworks like PhoneGap and Rhomobile, you’ll learn the art of creating applications that will run across all devices. You’ll also be introduced to the code-signing process and the distribution of applications through the major application stores, including RIM, Apple, and Microsoft.

关于作者
Sarah Allen is a serial innovator with a history of developing leading-edge products, such as After Effects, Shockwave, Flash video, OpenLaszlo and Laszlo Webtop. She has a habit of recognizing great and timely ideas, finding herself amidst a talented team, and creating compelling software. She is now an independent consultant developing mobile and web applications.

Sarah has been developing commercial software since 1990. She began focusing on Internet software as an engineer on Macromedia’s Shockwave team in 1995. She led the development of the Shockwave Multiuser Server, and later the Flash Media Server, introducing streaming video and multi-party communication in Flash Player 6. She has also developed software tools for multimedia, digital video, and graphic arts at Adobe, Aldus, and The Company of Science and Art (After Effects). She was named one of the top 25 women of the web by SF Wow (San Francisco Women of the Web) in 1998.

Vidal Graupera has been developing award winning mobile applications since 1993 starting as far back as the Apple Newton. He founded and ran a successful software company that developed more than a dozen consumer applications on a variety of mobile platforms over a period of 10 years. Vidal holds engineering degrees from Carnegie Melon University and the University of Southern CA, and an MBA from Santa Clara University.

Vidal currently consults with clients on developing mobile applications. He is one of the leaders in applying the new rhodes mobile application framework. More information about Vidal and his current projects can be found at http://www.vidalgraupera.com.

Lee Lundrigan is a Software Engineer from Syracuse NY. He is currently pursing a bachelora€?s degree in Software Engineering. Starting at a very young age Mr. Lundrigan had a passion for computers and emerging technologies. These passions lead him to the heart of the fast paced mobile computing world in San Francisco, California. He flourished in this environment, currently working as an independent consultant, specializing in web and mobile development.